It is a truth of online dating that the first date should be lunch. It’s brightly lit and there is a time limit. It is also a truth that if the conversation revolves around other people, and not reciprocal statements about self, it is probably a good enough first date. After all, she can’t show up naked, and he can’t bring his tax returns and lay them out and wait while she reads them.

From where they sat, they could see an older woman, making her way through the crowd on the street. She’d stop every few feet and look around, trying to locate her destination. Invariably her stops would bring her into too close of contact with someone in the crowd trying to get past her and she’d start.

Look at the poor woman he said, she looks lost.

She’s not lost, his date said, she just can’t find where she’s going.

Is that not the same thing?

No. Old people have poor spatial awareness. They don’t hear so well, and their peripheral vision is waning. Everything comes as a surprise. This is why she seems to be startled every time she bumps into someone, or they bump into her. She’s not lost though. She knows where she wants to go. She just can’t get there in a straight line. She has to “reticulate her splines” often but she does not understand the meaning of the phrase “reticulate her splines.”

Truth, she said, nodding. Old age is things bumping into you and vanishing before you can right yourself. Death is falling over. It comes. It is in-process. It is happening all the time.

They turned to watch the table next to them. A man sat down with a woman in a dress, along with a younger woman with a very young daughter. The man spoke a quick grace before they began to eat. The older woman, the grandmother, had very long grey hair. She had drawn it up in a twist of sorts, but not a bun.

Do you think they are Mennonites, she asked?

No, he said, they are not dressed right. The grandmother does not have the little cap – the white head covering with the little strings – and although I am not sure what you would call the pattern on the dress, no Mennonite woman would wear that pattern. It’s not simple – not humble – enough.

I think it’s sweet that they say grace, she said.

Pro forma, he said. There are graces and then there are graces and then there is grace. Some men say grace only to be observed saying grace. Some say it but what they really pray for is material gain, or status among the other pro forma grace-sayers. There are competitive forms of prayer out there. I heard about it from a friend just out of rehab.

I believe that, she said.

Their food arrived, a potato borscht with dill, skewers of grilled vegetables and lamb on the side. The lamb and vegetables had been marinated overnight in a marinade not unlike an Italian dressing. Vinegar and oil, sea salt and black pepper, oregano, paprika. Good food is a grace of its own, not unlike the pleasant surprises of youth.

When they were done and the plates cleared, she asked him if he had any terrible first date stories to tell.

He laughed.They are all first dates, he said, all surprises not unlike what the elderly feel – according to you. You are in perpetual fear of being knocked around, falling to your knees, being trampled.

She laughed then. C’mon now, she said. This is good. We should do this again. I would come back here for you, for the borscht, for the old woman who struggles, and for the family that prays. I think you would too.

She smiled then, and her smile was its own halo. He saw love and ruin, the passage of a thousand years, and the precession of the stars.

I do have one story to tell, he said.

Tell it to me then, she dared him.

There was this one woman. We went for lunch and it went very well. We spoke overlong. It took an hour and half. She went her way and I went mine but I admit, I hoped, I hoped. The next morning, she called – she apologized for calling early and I told her never to apologize for that, ever.  She asked if we could go for coffee. We did and again, we spoke for an hour and a half. Our first coffees went cold, as did our second. She told me then, just before we parted, of how her mother and father had passed away on the exact same calendar date, one year to the day apart. I thought it the saddest thing I had ever heard.

That is the saddest thing I have ever heard, she said. Sadder than the old lady losing her way.

Well, what happened then, she asked. I mean, why are you here meeting me, and not living happily ever after with her?

I don’t know, he said. Reasons. She lived ninety miles away. It seemed to be very far. We spoke on the phone, we drifted apart. We busied ourselves with other lunch and coffee dates with other, less interesting people. We never saw each other again.

Do you know why, she said?

He looked up into her eyes. Because we lived too far apart?

No, she said. It’s because she trusted you with a confidence. She confided to you. You know the difference between a confidence and a secret, don’t you?

He shook his head.

A secret is a dangerous thing, she said. It has two edges, like a knife. Betrayal and conspiracy. Secrets are the weapons of kings and concubines, sowers of dissent and usurpers. A secret must be kept only because it has the power to do harm once it is revealed. No good can come of it. A confidence on the other hand, is born of trust. It is observable. How you carry it is how you are judged. She trusted you with her broken heart and she confided in you. You carried this trust with you, carefully, and now you bring it to me. What is that, she asked him, if not grace?

Grace, he said, by way of agreement.

She looked up and away from him and closed her eyes and he believed that yes, he would do this again, with her, with the old lady reticulating her splines and the family that prayed and that her halo, made of silver, copper, and gold shining like the light cast over her shoulder, might endure forever. 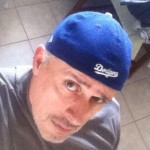 Steve Passey is originally from Southern Alberta. He is the author of the short-story collections “Forty-Five Minutes of Unstoppable Rock” (Tortoise Books, 2017), “Cemetery Blackbirds” (Secret History Books, 2020), and many other things. He is a Pushcart and Best of the Net Nominee and is part of the Editorial Collective at The Black Dog Review.