We Use Every Part of the Animal

We Use Every Part of the Animal

The first time I saw her, she had three heads.

“Her name is Gala – like Dali’s wife,” Laurent said to me, beaming proudly over his composite muse. Her discordant flesh filled his monitor: Gala’s skin a blend of every conceivable skin tone, stretched over a torso shaped like a bow tie tipped on its side. Crowning the Klaus Nomi architecture of her body was three partially formed heads, each one housing a myriad of eyes, lips, teeth, and slivers of nostrils.

“Eight years of work,” Laurent sighed. I couldn’t tell if Laurent sounded proud or despairing that it had taken that much time to create this impossible human jigsaw puzzle. I was too busy gawking at Our Lady of Leftovers.That was his other name for her. He started making her three years into his career as a freelance photographer. “It was all the trimming, all the edits,” he had said to me one night, hunched over a Moscow Mule at Gracie’s Tax Bar. “They had to go somewhere.”

Every time Laurent airbrushed or touched up a photo, he copied and transferred the edits. He built Gala out of eight years worth of slimmed love handles, banished cellulite, yellowing teeth, errant curls of hair, crossed-eyes, and sections of “over-ripe” noses. Enough shavings to roll together into a grotesque photo composite.

“What are you going to do with her – when she’s ready?”

Laurent looked at me strangely when I asked him that. His eyes told me that the thought that his secret work would ever be finished hadn’t crossed his mind until now.

“When she comes to life, then I’ll know she’s ready,” Laurent said with a wink. We had a good laugh about that. In retrospect, had I remembered that other famous Gala – Pygmalion’s Galatea – I wouldn’t have been so quick to play the hyena.

A month after I saw Gala, I decided to make my own impossible lady. I was haunted by Laurent’s logic: the scraps, the dead-ends, the refuse of my trade had to go somewhere. But my lady of leftovers would be made of stray text, not shards of digital imagery. Assembling the raw materials was easy: as a journalist, I had plenty of scraps to doggy-bag.

Laurent and I both airbrush people. He cleans up their image and I clean up their language. The dirty secret of interviewing people for a living is realizing how people talk isn’t how they get read. All the agonizing filler words: the uhs, the likes, the wells, the ahhs. It’s my job to make my subjects seem more eloquent than they really are. So when they start a thought, drop it, and pick it up five minutes later in the middle of a different talking point, it’s on me to jumble the order around so they actually talk in complete sentences.

I started stockpiling those edits. Anytime I cut a filler or untangled a knot of transcripted conversation, I copy and pasted it into a document. Within six months, my lady was coming along nicely. Arms of uhhhhs and ahhs, shapely breasts formed out of wells, a pair of massive lips swollen with deleted parentheticals… she was lovely.

I called her Stevie after Wonder. My ex always loved that one song. It’s what I miss most about her: waking up in the morning and hearing her sing “Isn’t she lovely?” in the shower. She couldn’t sing worth a damn… I missed that about her too.

Every melody a monde green, every wordless tone a dog whistle. Some nights I’d press my ear close to the screen, hoping to hear her through the hum of my PC.

I didn’t notice it was happening until my editor pointed it out. “You’re not going valley girl on me, are you?” When I asked him what he meant, he grinned and said “Like, um, you’ve been, like, talking like this, like, a lot lately.”

I just thought he was teasing me at first. But when I listened back to my most recent interviews, I could hear the filler creeping in. I almost never listened to myself on playbacks: I hated the sound of my voice. Usually I’d cough or hum whenever the conversation ping-ponged back to me. It got me weird looks at work, but I preferred scatting to the sound of my past self struggling to articulate himself to strangers in real time.

And besides, I knew what I asked. Why sweat the particulars of my wording when the only thing people care about is what the other person is saying? Had I bothered listening to myself talk, though, I would have noticed how deeply inarticulate I was becoming.I could still write coherently, but my speech? Day by day, uhhhhs and ahhs and you-know-what-I-means began to supplant the rest of my vocabulary. At night I’d take my transcription outtakes and add them to Stevie’s form. I started to understand her nonsense body: I felt like if I worked on her long enough, gazed deep into the crooks of her run-on sentence limbs, I would divine a secret meaning.

I went to Laurent’s after he bailed on yet another one of our drinking and bullshit sessions at Gracie’s. It wasn’t like him to miss our standing appointment. And to be honest, I really needed to see him. I hadn’t told him about Stevie yet and it felt like now was the right time.

It took five minutes of pounding on the door and shouting “C’mon, don’t be an asshole” to get Laurent to stop his protestations and open his door. It’s funny: when I saw him, I wasn’t surprised at what he had become.

The Laurent standing in front of me was a being in flux. His torso was expanding, flesh spilling out over his hips. A second nose had grown behind his old one, splitting it into two flanking half noses. A third arm, chubby and short as a baby’s, had started growing out of his right shoulder.

“I finished Gala,” Laurent said. As before, it was impossible to tell if those words were full of pride or despair. “And now she’s finishing me.”

I couldn’t help myself: I started laughing. My body shook with all the ha’s and hehe’s and guffaws and LOLs that I carved off other people’s sentences like so much marbled fat. I felt there were thousands of them inside my gut, trying to push their way out. Any apology or explanation that tried to crawl up my lungs for Laurent’s sake was dog piled and suffocated by all those laughs. I was still laughing when he edited me out of his life. What would a slammed door be if it was a punctuation mark? A period? An exclamation mark? Or is the ringing in my ear from the slam an ellipsis, an echo degrading into nothing?

I went home and checked in on Stevie. I was still convulsing from the laughter that had seized me and shook my body like a jackrabbit in a bobcat’s jaws. My Lady of Leftovers was where I had left her, reclining in her full glory on an open tab.

I scanned her body, searching for something that I suspected wasn’t there anymore. Sure enough, they were gone: all the laughs I had cut from transcripts, laughs that once outlined her body like a second layer of skin, had vanished.

I said nothing. I sat there, staring at my finished lady, watching the ellipses that used to be her fingers disappear before my eyes. Backspacing out of her body and into mine. Her silence is my silence now. 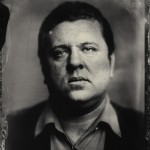