What do you think when you see people running? — Sometimes
it’s just chaos, sometimes the other way round — happiness,
excitement to just discuss something unsaid.

Sometimes things end in whispers, sometimes it’s a deluge of
rain — but who knows whether from a still face, with
surety; sometimes there are voices that even the

trees cannot hear. Some branches lay still while their leaves
suffocate in water; a plant whose name I don’t recall but
remember an illustration of which from a post-

card, its petals lap some water from a pool where a girl
stands in a way that says she awaits someone, or quite
the end of chaos — hands held in desperate

posture. What would you say when you looked at her from this
distance? — She seems to me one of the group, having
submitted to her inability of running after

forest-fires — there’s a silence a lip can’t tell from another:
the acknowledgement of inevitability of death after a
séance; maybe that’s why the chaos. All

this running. But what when excitement sulls? The end
is always the same, it all ends in silence — silence,
an unacknowledged guest — some say, peace. 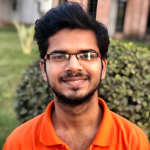 Jayant Kashyap’s poetry appears in StepAway and Rigorous magazines, among others; one of his poems has recently been featured in the Healing Words Awards Ceremony (September 2017). His collaborative poems with Lisa Stice now appear in zines.
His debut chapbook, Survival, is to come later this year from NY-based Clare Songbirds Publishing House. He is the co-founder and editor of Bold + Italic.