It’s not just that feeling of escaping something that opens up your chest, or the closure that lends rhythm to seasons of life: after spring, the long slow breath. After summer, the slow roast that browns and burdens every tree. After fall, the expanding grey billows of clouds muffled in woolens. After winter, the intake before the plunge.

I am bereft at change, missing the old in a way that makes it rosy, better than it was, a bargain in fact, wait – a blessing. It’s selective loss – like that of hearing or seeing – but by choice, in that I choose to forget all the reasons that the leaving is a good thing. I equivocate. I vacillate. I can’t stand to say goodbye, so I try to soften it – I’ll be around, we’ll be in touch, I’m sure I’ll see you soon enough. Lies. A day ago I couldn’t wait to leave. I hated everything I saw – in my heart, the way that Jesus says is worse than murder. I hated the dark confines of the space I inhabited for the past decade. There was nothing redeemable to me – a wasteland of wanderers, each one chasing their individual butterfly mirage. “Look at how beautiful this is.” And I envied them when they caught it.

And yet I am bereft at change, missing the new in a way that makes it rosy, better than it will be, a bargain in fact, wait – a future. It’s selective loss – like that of taste or smell – but by choice, in that I choose to forget all the reasons that staying was a good thing. A day ago I smiled at a joke, knowing I’d miss the joker like hell when I left. A day ago I nodded satisfaction at a job well done, simply put, admirably executed. A day ago I thought – this place isn’t really all that bad, and the people here matter, and this room I’ve lived in was a home – the walls filled with voices and the heart of it pulsing beneath us all, vibrating our worlds and shattering so many heartaches even as it made them. And I envied those who didn’t vibrate when it pulsed.

How can two things be so true and so false at once? It’s all a jumble of dice, tossed to the ground and randomly landing on concrete numbers – see and feel it, roll them in your hand and change it, it’s only when they’re still that you can actually know what number falls to you. I needed that falling number for six years, and I was still on the outside, but inside this wasn’t home.

It felt like it didn’t want me anymore, like the only way it knew to say goodbye was to itemize and calculate my value and then give me a swift kick in the ass as a parting shot. And as I calculated my value along with it, I felt again and again that I had come up short somehow, that I didn’t do enough for the good of my un-home, that my heart hadn’t been in it and my head hadn’t been in it, and that the punishment of leaving matched the crime of caring just a little too much about the silly, stupid game. I cared a little too much. I care a little too much.

And now I am perched on a railway bench waiting for the train I missed. I got on the wrong one somehow and have been forced to sit, thinking too much and too hard and with a lot of anger that is not directed at the train schedules or a particular person – unless that person is me. And I wish I had done better. I wish I hadn’t missed my train. I wish I wasn’t alone on this bench. I wish the path ahead of me was clear – as I’ve wished over and over for ten years when maybe, just maybe it was clear as day and I couldn’t bear to look at it.

Yesterday and today I looked – back and forward and to the side – and I saw just a glimmer of something wild, like the flash after a fox darts into the thicket by the road, just outside of your headlights but bursting in your peripheral. It wasn’t the place – it still holds sway, depending on its mood. It wasn’t the people – they are not rooted in time, but travelers too. It was a wildness in the timeline, a motion set in motion by another motion, motioning to me. It was an uncouth, unkempt, undone instant of sheer freedom that felt like falling – into and out of something. Up and down at the same time. Weightless.

It was the truth: it all mattered, and it all will.

Something about the Gary Metro concrete stretches the squeal of brake lines between the two domed buildings to the south until it croons like a banshee. And the song of those brakes is how I know. If you listen – if you really listen closely, you’ll hear it. But if you don’t listen, you’ll only know how it hurts your ears. Doesn’t music always hurt your ears? If someday it didn’t hurt anymore… how much I would miss it. The hurt tells me the truth of things just like the joy. The hurt says that stopping things – braking them – lets them speak. 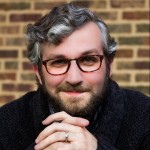 Chris Wheeler is a poet and storyteller from northwest Indiana. His work includes poetry, liturgy, plays and essays, and has been published in ALTARWORK, Wax Poetry & Art, Reformed Worship, Think Christian and Foundling House, among others. He is staff writer at a leadership development company and writes regularly at www.chriswheelerwrites.com.