Raymond says the safest place for a criminal is the Police Force. He knows. He’s a cop. Raymond’s tastes are simple. Spartan.  He’s not a man for muscle cars, trinketry and glitzy clothes.

He likes to hunt. He’s suffered no rejection or humiliation. There are no excuses. No resentments. No hatred. He simply enjoys it.

He’s handsome, washboard stomach, bulging biceps. Stays fit.  It helps with the job and he likes the admiring looks he gets from women and men alike, enjoys exciting their passions and imaginations.  But it’s the women who aren’t attracted to him that intrigue him. The shy ones. The damaged ones.  The deer in headlights.

She’s pretty in a simple way.  Dresses plain. Lives alone.  Is a women of routine.  Frequents a café on the corner next to her apartment.  Rides a bicycle to work.  Visits the museum and aquarium at least once a week.  In the evening she jogs in the park.

Raymond knows these things. He’s stalked her for months. Stalking is foreplay.

Raymond tails her to the aquarium.  She stands in front of an exhibition, absorbed, lost in the moment.  He watches unseen. She places a finger to the glass.  Raymond’s amused.  The woman’s a mouse, not a rule breaker and touching the glass is against the rules.

A tentacle, pulsating and glowing, reaches out from within the watery world of the aquarium and nestles to her finger.  They share through glass something soft and tender, sad and intimate. She slowly takes her hand away and departs.  He approaches the display.  Sees nothing.  Reads the illuminated card beneath the brass label identifying the creature he can’t see.

An octopus can disappear before your eyes and melt into the background.  They become the colour, texture and shape of their environment.  They have three hearts and the highest body-to-brain ratio of all invertebrates and many vertebrates and are extremely intelligent.  After sex the male becomes senescent and is eaten by the female.

Something slams into the aquarium glass.  Startles him. Volcanic colour. Red hot and black. Round pulsating discs stick to the glass as if trying to suck him in. He laughs. It’s beyond plain. It’s fucking ugly. He gives the area a circumspect glance,  then bats glass with his hand.

Come on, he says, come and get me. He laughs.  You can kiss your friend goodbye because when I finish with her she won’t be coming back.  Red and black so intense it could broil a steak in seconds slams against the glass, again and again.

Later Fugly. He chuckles and  walks away.

Preparation for the final act.

He finds her in the café.  Takes a seat across from her.

Do you mind, he says?

No. She lowers her head.

He enjoys her discomfort.  Talks mundane talk. She keeps her head down, sips coffee.

When it happens and it will happen soon, she will recognise him, remember him.  He likes it that way.  He smiles.  Talks about the aquarium, about fish, about arthropods, cuttlefish, squid, octopus.  How they’re his favourite food.

She lifts her cup. Her hand shakes.  Coffee spills over the edge onto the saucer.

We all hunt in our own way, she says.  She stares into his face.  A challenge. The warning is clear. She knows. Raymond feels warmth.  He’s never been here before.  But they all have had something.  Pepper spray. Knife. Gun. A knee to the groin.  Let her try it.  He’ll be ready. He always is. He’s excited.

He waits in shadows.  She jogs past.  He pursues.  She’s a silhouette in the distance. He picks up his pace.  Sprints to catch up.  Now. Deep in the park.  No one about.  He’s lost her. He stops for breath, searches the darkness.

She emerges from deep leafy shadows of trees, takes shape and form.  It startles him but he recovers.  She knows what he’s here for.  He senses it. Suicidal.

He looms over her.  Draws her close.  Crushes her to him. Celebrates his power.  Relays the message through brutal muscle.  She nestles into him, feels his excitement, grips his biceps.  Takes his face in her hands tilts it towards her.  Her skin opalescent, eyes shifting light, from deep brown to green to aqua to scarlet, hair rich, soft, thick and downy, teeth glisten. No longer plain.  Exotic. Beautiful. He is overwhelmed. It’s his. He can crush it. Her lips, velvet petals, meet his.  He feels their warmth and softness. Her tongue parts his lips.  He accepts her.  Is overwhelmed with release.  Feels a flowing of passion.  His eyes water, torrents of sensuality and pleasure.  It’s a kiss beyond orgasm, toes curl, skin tingles, hair bristles.  The cruel muscle of his arms wobble to custard, her tongue hot in his mouth. She takes his breath away. Feels her fingers knead the softness of his flesh, his knees weaken, his bladder purges, hot urine streams down his legs.

He wants to pull away.  He wants to stay. She holds him erect in her embrace.  Her embrace. Not his. Things dim. She releases him. He slopes to the path like entrails poured from a bucket, boneless, muscle-less. Jelly. Melting butter. He oozes from his track suit, pours like liquid from a plastic bag, sloshes plasma and brain.

The last imprint on his melting brain is her perfect form jogging up the slope as he melts into the gravel path. 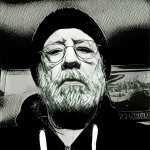