I Know How I’ll Die

I Know How I’ll Die

It starts with a tinge under my skin. An itch begging to be scratched. I find my pulse there, contracting, growing. I dare not touch it. I know it will embed itself under my fingernails, spreading to everything I touch, infecting my eyes, my mouth, the open spaces of my body, eventually seeping into my bloodstream, then to my heart, until… it stops beating, stops throbbing, stops breaking.

The rough corduroy couch scratched my back exposed by my too-small pajamas. I wanted to sit on the couch instead of against it, curled up with the blanket mom sewed from scraps of old flannel shirts and the Anne of Green Gables my 3rd-grade teacher had passed to me whispering she reminds me of you. But my father laid across the couch, taking up nearly all of it with his 300-pound body. He still wore his work clothes; a plaid shirt and jeans splattered with grout from his job laying tile.

He emitted a stench of both the bottom of a pet store cage and sour yogurt. He didn’t take showers often and fell into Mom’s clean sheets at night with a day’s work still covering him. She didn’t mind when he fell asleep in front of the television.

Reading on the floor, with my legs tucked under me, I disappeared into my book. Anne, chosen by her playmates to be Elaine in The Lady of Shallot, lay on the bottom of a boat with her eyes closed, hands folded over her breast. Her friends took turns kissing her quiet brows saying, “farewell forever” as she played dead and sent her body adrift down the river towards Camelot. I imagined myself lying in the bottom of the boat, my long hair spread around me, the rhythm of the water carrying me downstream. I’d look beautiful with my eyes closed. Anyone seeing me from the shore would fall in love with me.

A brush against my nose woke me from the story.

Thinking it was a fly or a strand of my hair, I attempted to sweep it away with my hand, but it wasn’t a fly. It was my dad’s foot. He’d just peeled his work socks off his feet. They were still damp with bits of fuzz stuck within the hairs on his toes. Mindlessly he caressed my face with his big toe, the way a normal father might caress his child’s head or back with his hand.

And I let him.

For months, maybe years, his touch was associated with fear. I wore long-sleeved shirts in the Los Angeles heat to cover the bruises his fingers left on my arms when he pushed or pulled me. The bruise that perpetually hurt was where his thumb pressed on the underside of my arm. To a bystander, it would appear that my father was simply holding his child gently, but he’d dig his thumb into the flesh near my armpit. That thumb let me know he was in charge. I was not to speak.

I let him rub his toe against my face because I was afraid.

The odor from his moist feet should have bothered me more than it did. I wouldn’t understand until I was older that it was the stench of sorrow that seeped from his oily body. I understood sorrow more than I understood anger. His anger came out sideways, like gaseous explosions, at people, at objects, at me. Sorrow was calm, quiet. I didn’t have the luxury of anger but I too bore the fragrance of sorrow. Sorrow smelled sweet.

I let him rub his toe against my face because it was comforting.

I let him rub his toe against my face because it felt like love.

His big toe, wet and coarse, rubbed up and down the side of my face until he fell asleep.

The next morning my face felt as if it was on fire. The mirror revealed someone who looked like a burn victim, half of my face crimson with blister-like open sores emerging from the inflamed skin. If I looked closely, I could see my pulse contracting red to pink in the raw flesh.

Our doctor diagnosed my outbreak as grout poisoning. Alkaline substances in grout are corrosive, penetrating skin layer by layer until it burns. Learning my father set tile for a living, the doctor presumed I contracted it from touching his work clothes. Embarrassed, I did not tell him how I really got it.

Each winter, usually after a cold or during a stressful week, I will develop impetigo, a common staph infection, around my nostril. I know I have it before its symptoms appear. A tingle will form under the surface of my skin, then a tightening until I can feel my heart pulsating within that dime size area. Within a day, red sores will develop until they burst into honey-colored scabs.

Doctors have traced this annual staph infection to that first infection from my father. When a heart murmur was diagnosed, the doctors wondered if it was the result of the numerous infections I suffered. Once, when an infection became severe quickly, I was hospitalized for a week on an antibiotic IV drip. Through the years, doctors began to paint a grim picture for me. Each year the antibiotics used to treat the infections will become less effective until one day they will not work at all. The infection will spread throughout my blood system, eventually to my already compromised heart, and I will die.

When I was a child, the only vacations we could afford were camping trips. We’d go as far as we could chance our clunker of a car, setting up our tent to look out on the ocean, an old Sequoia grove, or even a field of cows. I marveled that such beauty existed beyond the concrete city. In the quietI heard more than I did at home.

At night I’d leave our tent, flashlight in hand, to find a place to pee. Stepping out of our tent, far from the Los Angeles skyline, I was mesmerized by the resplendent universe stretched beyond me revealing just how small I was in this vast, immeasurable space. It was terrifying but thrilling. God unfolded, pressed, pulled and formed this infinite world yet still remembered me. I existed, not just as a thought but a body that moved and breathed and ached.

And in the moment it took one of those stars to wink at me, I knew I was loved, that I existed to be loved by the Creator. I felt it move over me, like fingers caressing my hair…and then it vanished.

A lanky boy with a long nose once loved me. He’d say these words, but I wouldn’t hear him. Each time he ran his fingertips down my back, he traced the words between my shoulder blades, hoping the words would seep into my bones, into my body.

I heard the words through the years but didn’t believe them until a stoic, solid man said them in another way, I know you. Love felt ephemeral but knowing someone went beyond love. I married him.

Our son has eyes like mine, large and dark-lashed, they see everything. Mommy, Open your mouth he says, his pudgy hands on the sides of my face. I want to tell youI love you. I want to say it in your mouth so it will go all the way down into your heart and tummy.

At first, I didn’t feel it but it was there, growing. I’d see glimpses of it, reflected in the mirror or in faces of those I knew, until I understood. My hands no longer shook like one dying of thirst. Each hand free to caress my son’s face or hold my husband’s body close. It entered through my lungs, becoming part of my breath, my knowing as I am known.

I know how I’ll die. 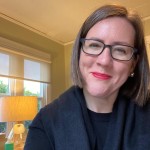 Shemaiah Gonzalez is a freelance writer with degrees in English Literature and Intercultural Ministry. She thrives on moments where storytelling, art and faith collide. She is pursuing an MFA in Seattle where she lives with her husband and their two sons.

Load More... Follow Us Instagram
I am My Hair and My Hair Is Me
Dictionary of Hands
Close Cart