Open your eyes and gather yourself. Understand your surroundings. Witness the beauty of what’s been created and understand the depth of the Aspen roots, constantly moving further into the heart of this earth seeking water where no man has been or will ever be, and see the leaves dancing in the wind high above in the realm of the Nighthawk where clouds are not so distant a thing.

Look down at yourself and feel the handle of the knife as it rests in your belt loop then take it out and run the blade against your finger until your skin breaks then wipe the drips of blood against your pants. Feel the wind. Follow the road. Walk atop the gravel that cuts the blue-green land in half.

Sense the rise and fall of the hills as you cross them and take the time the look out in any direction to assess how far you can see in that second, that step. Hear the scurry of a creature as it sees or smells you and runs for safe cover, as is the mechanism born into it and every one like it.

You are the guest now, the trespasser. Look to the top of the tree line and above that to the mountains where snow clings to its solid state and the sun bends its way around giant protruding rocks buried into the side of the risen earth like stranded voyagers.

Follow this road as it curves to the east and makes its entrance into the mouth of the forest and the trees close in around you but do not fear – you are not the first to walk this path. Push upward against the steep incline of the road, the rocks slipping under your boots and flipping downward toward some new resting place. Catch your breath when you get to the peak. Continue walking.

Notice the shape of a foot now and again, perfectly remembered in the dry dirt like a fossil of new order, and note the occasional color of a tree branch newly broken and lying on the ground as a severed appendage. See your breath flowing out in pockets of steam that float out of sight into nothing.

Hear the call of a bird. Watch the earth level out before you and see a puff of smoke to the south as it rises white against the vegetation below it and feel the warmth of the sun as it emerges from behind a cloud and changes the color of everything it touches with a golden hand. Quit the road when it begins to take you north and walk amongst the trees with their discarded leaves crunching underneath your feet as you bend your body in half to move beneath low branches.

Stop and let your breathing ease. Smell the smoke in your nostrils and feel it in your lungs and drop one knee to the ground while you survey in each direction. Feel the moisture against your skin when you rise again to both feet, a gift from the soil that sits black and dump below the Canopy.

Let the grey of neglected house wood be your guide. Walk quietly toward it and eliminate any noise; move diagonally between mature trees and peak around the side of their trunks as your close in. See the decrepit porch sloping toward the ground on one side, the other propped straight by rotten lumber. Move behind the fattest tree in your sight and sit for several seconds, turning your head slowly in all directions in search of movement.

Shuffle the leaves around your legs until you find a rock then throw it at the front door and let the sound pierce the forest and hear a bird leave its nest above you. Listen. Find another rock and stand and move from behind the tree and hurl it at the window to the right of the door and listen to the glass fall on top of itself on the ground below and move back behind the tree. Listen. Look. Unlock the strap holding the knife in place and stand up.

Move in a crouch to the front step and test it with your foot and when it creaks move to the second step then the third and stand on the porch and look in all directions. Move your back against the house and move along it until you come to the window and bend down and look through it and see inside and flare your nostrils at the putrid smell. Listen for movement, for breathing. Survey the forest again and move toward the front door and pull the knife from its sheath as you reach with your other hand to the doorknob. Turn it slowly and listen, then push gently until darkness exists between the frame and door. Look beyond the porch again then
push the door open and stand ready. Listen. Feel your heart smashing against your chest and your throat and your ears and calm your breathing.

See the plates stacked upon one another in the room before you, bean juice turned to crust and the remnants of cornbread across the filthy carpet. Glance at the half-white of the ashes and burnt wood in the black stove wedged into the corner. Step lightly through it and look through the door on the left into the kitchen where more dishes lay in black water and a roach leaves for darkness. Listen. Begin down the hall past a bathroom where a toilet sits without water and the floor opens to the earth underneath it and the smell of feces tightens your stomach and you spit in the floor to clear the saliva. Move toward the final door where the hall ends and the
light doesn’t reach. Push it open.

See the mattress on the floor in the far corner covered in piss stains browning with age. See the empty cups on their sides and the plates scraped clean before being stacked perfectly against the wall under a window blackened from the outside by plywood. See the baby doll naked with filthy yellow hair. See these things, then see the girl sitting at your feet, just off of the mattress, with both hands covering the top of her head and a rusted chain running from her wrist through the floor, secured to a pipe below it. Ask her if she’s alright. Tell her you’re here to take care of her. That you’re going to help her.

Step quickly back into the doorway and peer down the hall. Listen. Tell the girl you’re coming right back for her. Tell her again that she must stay quiet. Move quickly down the hall and glance into the bathroom then the kitchen then step onto the porch and look out into the woods and let your eyes adjust to the light. Jump over the steps onto the ground and walk around the north wall of the house, searching the ground, then the west wall of the house and finally the east facing wall until you spot an axe sitting on its head, the handle resting against a pile of chopped wood. Jog back toward the front door and carry the axe into the room and when the girl jumps backward tell her everything is alright but that you have to break the chain. Tell her you need her to pull her arm so that the chain is taut and tell her it’s going to be loud but that she won’t get hurt.

Plant your feet and swing down on the chain and watch the spark flash in the dark room and swing again at the same spot and do it until the metal finally parts. Listen. Take the chain still attached to the clamp on her wrist and wrap it gently around her arm and tell her that you’re going to get that thing off of her but that you can’t do it right now but you promise you’ll take it Off.

Put your hands under her armpits and lift her and feel how light she is and wonder about her age. Don’t ask because she won’t know. Pull her to you and notice her left eye matted shut and the black hair that covers her arms and legs and keep one arm under her knees. Listen. Walk out of the house as fast as you can without jostling her and step off of the porch onto the ground and head into the woods.

Walk with purpose but show no fear for she will see it. Duck under the low branches and crush the leaves underneath you and don’t stop for anything. Reach the road and follow it. Look down at her face and judge it and act accordingly. Tell her everything’s going to be just fine.

Wonder to yourself how long it’s been since she smelled fresh air off the mountain and know by the way she squints her eyes that the sunlight is a forgotten friend. Feel the presence of another and see movement in the corner of your eye and take only a few more steps and sit her down gently with her back against the trunk of a tree and hold her hand for a moment and tell her you’ll be right back. Right back. Straighten your back and breathe strength back into your body and walk toward the movement. Listen. Look. Pull the knife from its sheath once more and hold it pointing to the ground. Hear the rustling of leaves and footsteps and see the man
standing a few feet away with his brown teeth exposed and curly ringlets of uncut hair bouncing above him as he sways before you in a fighting stance. He wants the girl back. No. See the machete come over his shoulder as he points it toward you then takes offensive steps – back away a bit then plant your right foot into the soil. Jump aside as he swings the blade at you. Move your head down as he does it again. When he stumbles slash your blade against his head and see the blood slide down the side of his face. Jump backward as he lunges at you and kick your foot toward his blade and watch it bounce against the ground to your left then run
toward it and when you know he’s beat you to it jump on top of him and send your knife into his back. Again. Again. Roll him over and watch him struggle for a breath and draw your knife against his throat with all your strength and don’t leave until you see his eyes stop dancing. Run back toward the girl and fall on your knees in front of her and tell her everything is just fine and that you’re going to take care of her. When she looks up at you grab her hand and hold it to ensure her. Pick her up as you did before and walk with care along the road until you spot a pack of purple flowers attached to a skinny green plant coming up out of the earth. Squat down and lower the girl gently and pick a flower from its home and place it in her hand. See her smile.

Pick another and place it behind her ear and smile and nod and pick her up again and continue along the road. Point out to her everything beautiful she has yet to see or has long forgotten. 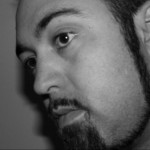 Jeremy Lane is a writer living in North Texas with his wife and three children. He has published several books, including While I’m Still Myself: a collection of short stories.