(Please click here to view this piece in its intended formatting.)

In the days after my dad died 5 years ago, what I missed most was the way he’d press his wide, heavy hand into the space between my shoulder blades as if he were pressing calm and light and belonging and safety into my body. My dad’s hands are what I miss the most.

My dad’s eldest sister is a sculptor. She builds up and breaks down clay with her hands. Pat. Pat. Pat. I can see my dad in her. Clay is finely-grained natural rock, soil, and sand combined with hydrous aluminum, phyllosilicates, variable amounts of iron, magnesium, alkali metals, alkaline earths, and possible traces of quartz. There are two ways to create an object out of clay. Take it away or build it up. I suppose the same can be said for rebuilding a person after grief and mourning has cracked and dried up.

I learned to draw by watching my father. Sharp graphite from a shortened number two pencil on rough, potholed, drawing paper. I always admired his confident strokes and determined line work. When he put the pencil into my hand, I tried to do the same.

As a child, when my father made my lunches, he’d always leave a drawing and a handwritten note tucked inside. A reminder of love and safety and a loving place to come home to when the school day was over.

Fatherhood. Noun. In the state of being a father. The word father has connections in ancient Latin (pater), Ancient Greek (patēr), and Sanskrit (pitr). The first known record of the word dad was around 1500 and scholars suggest it might be from  the sounds babies first make.

The Ganesha Mudra is named for the Hindu deity who removes obstacles and is meant to awaken an energy within. Ganesha, as well as removing obstacles, is said to sometimes put obstacles in one’s path so that she can find strength in overcoming them.

When I was 10 or maybe 12 and my sister Hannah was 6 or 8, we went to the grocery store. My dad rolled up the sleeves of his threadbare teal and blue flannel and reached for our, his daughter’s, hands as we crossed the parking lot. Hannah jumped at the opportunity, didn’t have to think twice. I hesitated and mumbled an excuse, thinking I was too old to hold hands. The image of he and Hannah’s backs, skipping through the parking lot, me standing behind, missing out on this moment of unadulterated joy haunts me. If I had known that years later I couldn’t hold his hand anymore, I’d have held on tight then. It’s one of my greatest regrets.

When I first learned to play the piano I learned two things: One’s hand must arch gracefully over polished keys, resting fingertips gently, halfway up the key.  A melody is always carried by the right hand. My dad never played piano  but wished he did. During my lessons, he’d sit in the back of the room, trying to learn anything he could. Occasionally, as I practiced, he’d sit beside me so I could teach him something. His big hands never arched the way I was taught they should, and when I tried to show him the proper sequence for scales we’d always laugh that he couldn’t tuck his thumb under his index finger to reach the note.

Jainism is a nontheistic religion founded by Jina Vardhamana Mahavira in India, in the 6th century BC. Jain religion teaches salvation by perfection through successive lives, non-injury to living creatures, and is often noted for its aesthetics. The ancient dharmic religion uses the symbol of the Ahimsa hand to symbolize practitioners vow of nonviolence. In the middle of the palm is a wheel that symbolizes the dharma chakra, to halt the cycle of reincarnation through the pursuit of truth. I wonder if my dad has been reincarnated. I wonder if I can find his new self.

On certain mornings when I was young, I’d wake to the smell of proofing dough and wander into the kitchen through a beam of sunlight, dust, and flour particles. My dad was an excellent baker, like his sisters, and sticky buns were his specialty. Thump. Thump. Thump. I can still hear the sound of him kneading the dough until it became smooth and elastic. The kneading process warms and stretches gluten strands creating a springy, elastic dough. Thump. Thump. Thump. He always showed us love through the use of his hands- kneading dough, paintings and pencil sketches, holding hands with three quick squeezes. It didn’t matter what it was- it all translated to the same thing- I love you.

Be like lotus. Let the beauty of your heart speak. Be grateful to the mud, water, air , and light. -Amit Ray

Mudras  or hand expressions are said to shift a person’s energy. In Love Multiplier Mudra, it is said to change the energy of the perceiving centers of the brain. It removes thoughts that can harm you and generates a feeling of love.

From the ages of 1-7 I was difficult at night. I wouldn’t fall asleep without a strict ritual, and sometimes even then I wouldn’t. My father had to rub my back until it seemed I was drifting off, but inevitably, the moment I sensed his departure, I’d start crying. He’d ask me to count until I got sleepy and promised to be back in increasingly longer periods of time. Three minutes. Five minutes. Seven minutes. If I ever felt that the allotted period of waiting had run out, I’d wander with my blanket into my parent’s bedroom where they watched the news, and he rubbed my mom’s feet every night. He’d pick me up, bring me back to my room, and start the ritual all over again until I finally fell asleep.

Otters hold their hands at night so they don’t float away from each other. Anthony’s hands keep me safe. I can’t fall asleep anymore without his hand in mine. I’m scared of floating away.

Complicated grief disorder is prolonged grief symptoms after the onset of loss. Those who experience normal bereavement have a period of sadness, numbness, guilt, and anger, however, for those experiencing CGD those emotions are debilitating and don’t improve with time.

Although most know the Kubler-Ross theory on stages of grief, in my research into mourning after the death of my father, I came across another theory by Dr. Theresa Rando. It outlines 6 different processes a mourner experiences. Recognizing the loss, reacting to separation, recollecting, relinquishing control and old attachments, readjusting, and reinvesting. I’m stuck on relinquishing. Relinquish. Verb. Voluntarily ceasing to keep or claim. I can’t unclench my fists, my grip on my father’s paintbrushes and sketch pads is only becoming tighter.

Years ago, when my dad was still alive, I went to Istanbul. I remember walking through the Spice Market by the Bosphorus Strait. Outside, lining the exterior of the expansive building were people selling fresh fish out of plastic buckets, and chirping chicks in small baskets. Inside, piles of vibrant spices lined each vendor’s stall. Medallion colored Turmeric, marigold Curry, rusty Sumac, sandstone Cumin, and lipstick Paprika. Delicate squares of powdered turkish delight cut through the smell of sharp spices with a soft sweetness.  One stall had small items hanging near the register, among them Tasbih beads. These Muslim prayer beads are used as a guide during prayer and are composed of 99 or 33 beads. During prayer, the 99 names of Allah are recited. Typically the beads are made of polished wood. The ones I picked out for my mother had 33 dark wooden beads and a small white cotton tassel. When my dad got sick years later, she would leave them on his nightstand, he’d hold the beads, feeling their cool smooth texture, thumbing them around and around his palm. Saying his own prayers, his own devotions.

After my father died, my mom would often reach across the counter and gently unknot my fists from their perpetual home. For the first three months I would wake up with scarlet crescent moons on my palms from fingernails having no where else to go.

The sister of the Memento Mori picture is the Vanitas still life which typically includes various symbolic objects that remind the viewer of their own mortality. Vanitas originates from the first line of The Book of Ecclesiastes: “Vanity of vanities, saith the preacher, vanity of vanities all is vanity.” In a famous Vanitas painting by Caravvaggio, a skull sits atop an open, blank book. A hand holding a quill hovers over the empty pages as if waiting to write. My dad was transferred to hospice before he died because he knew his body would never recover from his stem cell transplant. I’ve always wondered how he knew. There’s something very courageous, that I didn’t recognize until well after his death, about knowing and choosing to write your own death when you know you will not survive. Being the hand who’s poised over a blank page, deciding what words to use.

My dad used to reach down near the shores of fast moving rivers to pick up smooth, flat rocks polished for years with water and sediment. He’d keep them in a tray tucked between a Modigliani book and a Human Anatomy for Artists book. When my sister and I were younger and nervous about something, he’d press a stone in our palms. After picking the stones from the riverbed, my dad would make them into worry stones with a thumb sized valley in the middle. I remember the weight of the stone in my pocket, cool against my leg, the way the stone felt against my thumb as I ran it up and down the valley. Up and down. When my dad was in hospice I kept a stone in my pocket deepening the valley with my feverish worry.

The first time I broke a bone, I refused to go to the hospital and my parents nearly had to drag me there. I was 8 years old and rollerblading up and down the sidewalk by our house when I hit a rock and went flying into our neighbor’s mailbox. My dad knew immediately, he left the lawnmower in the middle of the lawn and rushed toward me. With ice on my wrist and hand inside, I repeated over and over, “It’s not broken.” I don’t remember much else, because of the painkillers, except my father gently reassuring me that I wouldn’t have to wear the cast forever as I fell asleep next to him in my parent’s bed.

Whenever I got a sinus infection as a child, my mother and father would take turns taking care of me. My mother would slather lavender lotion up and down my legs and gently lead me to relax individual body parts. When my father’s turn came he’d gently press the pad of his thumb against my forehead and cheekbones until the pain and pressure yielded to his touch.

After nothing worked for the panic attacks I had after my father’s death, my therapist suggested a particular type of zen meditation. It’s focus on breath from the center of the belly, and simple settled spine and folded hands was supposed to aid in resolution and forgiveness. 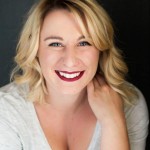 Kateri Kramer is a writer, illustrator, and book designer living in Colorado. When she doesn’t have a pencil in her hand she can be found exploring the Rocky Mountains, rock climbing, and baking. She has an MFA from Regis University. Her previous work can be found in Trampset and Parhelion Literary Magazine.