The infrastructure is sound, the demarcation lines on the roads clear and new, and the curbs and their boulevards handsomely curt and reliable.

And it’s a racket.

The traffic cages up on itself and the drivers which I am unfortunately a part of are waiting, waiting, and waiting. Red light, green light. All the civilization is some faux insurance against something not spoken about. But I stay on then, and move with the traffic back and forth. A man in a truck wants to pass the cars on a one lane highway once I am out from the overcrowded town with the unoriginal urban sprawl, a sprawl that eats up the green spaces and the woodlands daily. People say I am so kind, laid back, but I am tired of such then. It was a man like that who killed my friend. She was twenty four, held two jobs, one as a front line worker in a series of group homes, and one as a teacher. She was on the level, was cool actually, not like the ones that play at being cool. We drove around some rural places delivering trucks and people to where they had to go. She wanted to have a few beers in the parking lot one day, but I said no. I was too cautious about drinking. It was a time I should have lived a little, and taken her up on her offer. Instead we sat on a porch swing outside of cities and even towns, me with my silence and her with her high zygomatics and blonde hair. I told her I would catch up with her sometime, have a coffee or something, but for then, had to go.

But you never know.

It was a few weeks later that I got the call.

Allison was killed in a head on collision. A drug guy was high, stole his girlfriend’s car from a casino parking lot, and wanted to go to the city. He crossed the yellow line and hit her. She was going to a concert. The passenger, a friend of hers, lived. She died instantly. She is gone.

I didn’t know a lot of her friends. I went to the funeral but it was surrealistic. I myself am surrealistic through and through, yet I wanted it to be real in that I wanted closure. I didn’t get it. Allison’s ghost hovers around. Not her real ghost. I have seen and spoken to real ghosts. It’s her memory that I mean. And you know what? A memory like that is harder to deal with than a real phantom in the shed, on the lawn, around a walkway, near a dream.

It’s this and just a general ‘tired of being a nice guy,’ that makes me at that moment throw on my left turn signal. I am not turning for another ten minutes, but the car that is better than the others can’t then pass. I also move over a foot, closer to the line. He has to wait. We all have to wait and so should he.

A show of resistance for the rule followers, against the rule breakers that endanger others continuously. A living moving nod to many of the dead flowers and rain soaked pictures and ball caps by the sides of roads. Sometimes I think I see her in a car, on a street, the blonde hair held up by the baseball cap but parts whispering down. Good strands. Something whimsical but real in an often difficult world.

But it’s never her.

It’s early. It’s rare to go there that early. An eraser is easing the dark and allowing the dawn. I drive down the long road I call Coyote Road. There is no sign on the end of the road or anywhere therein, so I figure it can use some poetic license. The animals there are not like city coyotes full of mange and their own skinniness, but are instead fluffy, sure coated, and robust. They try to get the deer and the rabbits and sometime succeed. I had become so enthralled with them, watching them here and there, that I studied them in real life and in books. One of the pages had, intentionally or by accident, captured the spirit of these entities:

Since European settlement in North America, farmers and others have waged war against the coyote populations. These animals, which scientists are still learning from, proved to be far more resilient than otherwise thought. People have tried to extinguish them by fire, by poison, by gunshot, by other animals, and by more means besides. The coyotes always knew how and when to migrate, to emigrate, and above all, to adapt in behavior and diet. They eat meat, but can and often do also survive on a non-carnivorous diet. If pushed out of forests and fields, they can live in cities and even remain there in packs. They have, beginning in Peterborough Ontario, mated with wolves, spawning a new breed of coy-wolf. When populations are threatened, they procreate more. They are generally small and were once even classified in the same terms as hedgehogs, beavers, and raccoons. The coyote is venerated by many indigenous groups, thought to be magical, a good totem animal, its sight auspicious; it’s crossing of one’s path serendipitous.

I get out from the Jeep and begin walking. I will go into the forest a half hour deep, roam around a bit, and come out, which will take another half hour. Across my path immediately, about fifty feet ahead, goes a coy wolf. I am startled. He looks tired, like someone heading home after a night out. It is then I realize that this is exactly what is occurring. Early morning for the diurnal world is late night for the nocturnal world. He has been far and wide and long, perhaps many hours long, and is on his way back to somewhere. Usually there are more than one of them, but this soul is solitary. I should head in the other direction, but I am drawn to the geography of that side of the forest. There is a valley, deep and long and wide. There are main paths, side paths, hidden foot trails, and even game trails. We walk parallel for a bit. Him down low, and me high up along a ridge way. Then he cuts through the thicket, chaparral, and feral shrubs and fallen trees to the bottom of a hill and walks along there. I go my way, which is more to the right, and he continues on.

He is not a threat to me.

I am not a danger to him.

We are both a bit tired and world worn.

Too much so to bother.

A half hour later I stand on a small summit and watch the land. I have walked and thought and photographed trees, mushrooms, berries, and other wild things along the way. I am about to turn and head back to the path to go home but I remember him then and look out at the horizon line. Just in from there, the sun in back now making a powerful ascent from its slumber is where he comes out. He doesn’t venture far. He is just surveying the scene, – seeing what is there.

Five feet out to the open field.

He looks over and sees me.

If it’s not a bit psychic, I don’t know what is, because I am still, like a rock, and there are things around me on and up the summit.

He turns around and goes into the forest, a story of fur and legs disappearing, tapering off quickly to another world, as if he melted or meshed into the earth.

I turn and make my way. These are really his roads. I realize I am a visitor. The Abrahimic religions talk about one birth, one life, one death, and one heaven or hell. But if the others hold truth, and a soul can come again, I would have no problem being borne as a coyote. In fact I would be honored. The world on the way back is verdant and I wander through archways of leaves that wait on branches. They don’t whisper anything like in books and movies, not even metaphorically, and I know why. It’s because I have peaked already with the real and actual living vision of the coy-wolf. Nevertheless, I go down a valley and look at an old abandoned car riddled with bullet holes and the dreams of the forest world. A couple beer cans, mans dull and heavy footed contribution to this beautiful woodland, are there from whoever, plus what must be a decades old can half rusted out that says TRANSMISSION FLUID, in its bold capital lettering. Its then I have a peculiar thought. I wonder if the coy wolf has lost someone to the traffic, to the wild and selfish and overpopulated world of cars and trucks that don’t seem to care, that by their nature in a many ways can’t care.

Was that why he was alone?

Was that why he stared at me? And another, more searching and convoluted thought that makes sense then only to myself. Is it beyond reason, I wonder, considering his age and the area, his terrain and travel, all the ‘this and that’s’ of it all, that the coy wolf witnessed the death of my friend? 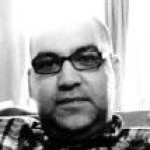 Brian Michael Barbeito is a Canadian writer, poet and photographer. Recent work appears at Fiction International from San Diego State University, CV2 The Canadian Journal of Poetry and Critical Writing, and at Catch and Release-The Columbia Journal of Arts and Literature. Nominated for two Pushcart Prizes and one Best of the Net Award, Brian is the author of Chalk Lines (Fowl Pox Press, 2013, cover art by Virgil Kay). He is currently at work on the written and visual nature narrative titled Pastoral Mosaics, Journeys through Landscapes Rural.