Freyja Vogelaar, your first resurrection goes something like this: You’re eight. The chauffeur drives your mother and stepfather to some racetrack. They forget all about you, drinking cocktails for hours in a floodlit ring, betting on dogs who chase a throttled hare.

You spend the evening alone sitting on the pantry sill. The sad maid, Magda, doesn’t really babysit—she locks herself away in her bedroom off the kitchen, reads her thick Russian novels.

That’s OK, you like it when Magda ignores you. It means you can talk to the strutting pigeons out on the fire-escape railing, outside the twelfth-floor window without Magda’s eye-rolling at your silliness. You press your nose to the glass, coo at the birds. In the murky twilight, they peck the casements as if answering your questions in some kind of code. They are so close. You admire feathers shining through all the spectrum’s colors, count the individual lines in their yellow-brown irises.

Night-time sneaks up on you when you’re not looking, and down on the street, on Broadside Road, lampposts flicker, then settle on constancy as they project their scalene triangles, slicing the lightly-trafficked avenue into wedges.

But then a tiny red shoe sails past, a parcel of cloth follows, flashes down, a clump of yellow and scarlet tumbling, spinning, tangled all together with a jumble of flame-orange curls.

A soft bang, and then a car alarm brays below.

You run down the hall out of the apartment, to the elevator. You press the down button. You keep pressing it as if it might bring the carriage faster.

The doors yawn, then close. The panel lights and sings in fives.

Ding-ding. The steel metal doors creep open, and you poke your fingers into their widening crack, push through. You sprint across the atrium, but the evening doorman steps from behind his marble desk, twines you in his arms.

You wriggle free, but one of the brass buttons on the big man’s blazer scratches your cheek. You don’t care. Something propels you forward.

A group of ashen-faced people mills around the walkway, hands on their mouths. A couple of women are crying. They gaze at something.

There. A tiny boy’s body.

It’s flattened in impossible angles, nests on the roof of a car. In the dusk, his miniature hand dangles and casts a long, claw-like shadow onto the sidewalk. The  miniature crescent nails shine like five little white moons. Blood trickles in a stream down the windshield and pools onto the street.

You take it all in for a moment, then are sure you can help. You elbow and push through the assembled crowd, slide under someone’s outstretched arms, then make it into the open. You stand on the curb, stretch to your tip-toes, and grab the still-warm fingers of the fallen child.

There, I’ll fix you now, you whisper, your voice not really yours.

In that moment, a current zips through you; it conduits along your veins. There’s a staticky pain—kind of like that time when you poked a fork into an outlet. Now, a strong current arcs and pulses from your toes to your nape. Your teeth rattle. There are sparks, and you’re jolted, but you hold fast, the little boy’s inert hand in yours, and his digits begin to jitter in some ancient-seeming rhythm. There’s a weird scent in the air like freshly sharpened pencils. Or does it smell more like a fresh box of crayons?

After that, you can’t calculate how long you moan and rock and divine and genuflect below the car roof under the dead boy who slowly shrinks down by degrees in some kind of process. His fingers twitch, and his hand grasped in yours begins shifting shape.

The boy disappears. He transmogrifies into some other thing, becomes something else. His true self.

Now, you cup a small cardinal in your palm, though his neck lolls to the side like a wilted flower stem; his mouth’s a beak splintered in two places. Then, you feel the creature stiffen as his head rights itself, and the beak cracks disappear, and your trance ends when you feel certain movement. The now-warm feathered thing trembles, opens his black eyes, shudders, perches his wiry feet on your finger, shakes out his revivified wings.

The crowd, your audience who have been silent until now, applaud and holler.

Did you see that?

You hear sirens in the distance.

The bird vaults toward the building’s eaves, swoops back around, then alights on a power line. He chirrups a thank you, wings curving into a scarlet smile, and you marvel at his color under the streetlight’s gleam. Off he flies, and as the red blur lofts skyward over the leaf-strewn roadway, he shits on your parents’ arriving limousine as it circles the building’s drive.

Good bird. You nod and grin.

After this, Freyja, your childhood is like some box forgotten on a back shelf. 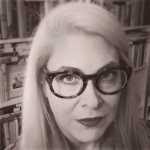