Peter Jordan opened the front door of his home and took a breath of morning air, smiled, and looked around. The sky was grey with pockets of azure blue peeking out like a shy child in a crowded room of strangers. The air was thick with sea fog.The brown rushes next to the house danced in the sea breeze as overhead curlews glided. Their movements were free and easy, upwards and over towards a near-perfect heaven that could not be grasped. They sang their shrill song of summers lost and wasted. Peter knew in time he too would sing that song. He would cry upon the air like a bitter calling to days of yore when he was too young to care or realize the precious importance of time.

The two storey house in which he lived was an old structure with no running water or modern convenience such as electricity. His only light, the open fire and a paraffin lamp that was hanging from a hook on the ceiling. It was a simple life but one that Peter had left his life in London for to move to an Atlantic island on where he could devote himself to his work and feel a sense of belonging to the earth and the trees that surrounded him. In a city of millions Peter had felt alone and isolated but here on the island he felt that he belonged. He felt that he was part of something.

After putting more timber on the fire he commenced his morning walk to the seafront a short distance from his home. The soft brown earth sank under his heavy boots as he crossed the ground. His long, woollen coat swung gently as he moved;a tweed cap was pulled snugly down on his forehead. Beside him, his companion:A loyal follower and protector, a border collie,the old dog’s steps were slower and stiffer now but he happily walked alongside.

The sounds of the sea battering against the headland were intoxicating as the heavy swell spilled over the blackstone.

He stood upon a rock on an outcrop,beside him the sea that buried a thousand tragedies deep within its cold and dark waters. Peter kept his own pain and loss covered within his own dark spaces. He avoided dredging the depths as this could drag to the surface unwanted relics. Best leave the past with the past.

Peter was a man who enjoyed his own company living alone on the edge of the island.

He had lived there for the last three years. He endured and enjoyed the isolation. For the last three years, his only human contact was with Sean Bannon, who brought him supplies from the mainland twice a week. As Peter stood on the blackstone shore he could see Sean’s boat approaching on the horizon. He looked at his watch; it was 10:45. Sean was as predictable as the day turning to night.

Ten minutes later Peter had helped Sean to pull his small boat up onto the shore. Sean handed him a box containing the supplies he would need for the next four days and the two men headed back toward Peter’s house where they sat and drank hot tea and talkedPeter looked forward to the visit. They talked of incidents and news from the mainland. Apart from his battery transistor radio, this was Peter’s only window to the world beyond.

“The weather is turning, that sky is getting black. I won’t stay long,” Sean said as he drank his mug of tea and looked out the open half door towards the bay.

“Yes, the wind is picking up for sure, you can always stay here if you wish, until the worst of it passes.” Peter said.

“Eileen is waiting for me, it’s the grandsons birthday party this afternoon. I have to get back for that.”

“Did you never think of moving away from here?The winter is on its way and by all accounts is going to be a rough one. It’s no place for a man on his own.”With Padraig and Josie gone you are all alone here. It’s not natural or safe either, what if you get sick or you had an accident. There will be nobody here to help you”

“I’ll be fine.I have the dog, and sure he will look after me. I have lived through three winters here. I will survive a few more, besides I still haven’t finished my book. Don’t worry, Sean. Look you better get going or I will be worried about you getting home safely.”

Peter followed Sean down to the blackstone shore and helped him launch his motor boat onto the water. Black clouds were racing overhead and the wind was brewing.

“I’ll see you on Wednesday morning.” Sean had to shout over the howling wind as he got into his boat.

“Oh Christ, I forgot to give you this, a letter for you.It was delivered to the post office in Carraigdun,” Sean said as he reached into his inside pocket of his coat and leaned forward to hand the letter to Peter.

Peter waved at Sean and watched him disappear into the horizon. He then turned back for home and looked at the envelope. He rarely received any post. He looked at the stamp it was English. The handwriting on the envelope was familiar. At home he put the letter to one side and unpacked the supplies that Sean had delivered. After cooking a meal for himself he decided that the roof of the timber shed outside needed to be repaired and was a priority with the threatening winds making landfall soon.

Thankfully the storm was short lived and a clearance in the afternoon gave him the opportunity to complete his task.As dusk shadows fell upon the island at five in the evening, he realized there was little more he could do but rest for the night inside.

A welcoming and warm supper was devoured and sitting by the fire he looked again at the envelope on the table and after much procrastination he carefully opened it. Inside was a handwritten letter. He carefully unfolded and discovered that it was from his wife Emily, from whom he had been separated for the past five years. He slowly read through its contents.His hand fell downwards in shock as he stared into the fire. Confusion, sadness, and helplessness washed over him. He wanted to cry out,to find comfort in confiding in someone, but there was no one to give him solace. He opened the door and walked out into the all-consuming black night.

Four days later, Sean Bannon’s boat entered the bay of Blackstone beach.He was surprised Peter wasn’t waiting on the shore. He could hear Peter’s dog barking. The noise was coming from beside the house. When he reached the dwelling, he knocked twice at the door, and after receiving no answer, he entered. The kitchen was cold and dark, the fire was unlit, and there was no trace of Peter. Sean went outside and called Peter’s name.He checked the outside shed. He climbed a rocky mound at the rear of the house to get a better view of the island. He spotted the dog heading towards a line of ash trees and followed him. As Sean approached the trees, he could see the figure of a man slumped next to a tree. He ran towards the human form and prayed to himself as he approached it.

Underneath the centre ash tree he found Peter with his back resting against the trunk. His eyes were closed and his head was drooped forward. His body felt cold and wet as Sean shook him and shouted his name. There was no response. Sean shouted and shook him again. Peter’s head turned slowly upwards and his eyes opened. He reached out his arms and he grabbed Sean tightly, hugging him while he sobbed bitterly. After a few minutes he released his grip on Sean and spoke.

An hour later Peter had packed up the possessions he needed, and with Sean’s help lifted the old dog onto the boat before they headed out into Blackstone bay towards the faint heat of the winter sun and the opening expanse and promise of the mainland before him.

He turned his body backwards to look at the old grey house that had been his home for three years. Overhead curlews glided. Their movements were free and easy, upwards towards a near-perfect heaven that could not be grasped. They sang their shrill and sad song of time lost and wasted. Peter now cried upon the air with them, a bitter calling to days of yore when he was too young to care or realize the precious importance of time. 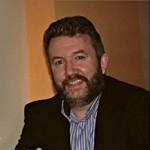 Kevin McManus lives in Western Ireland. He has published four novels so far. He works as a secondary school teacher and during his free time he enjoys playing music.